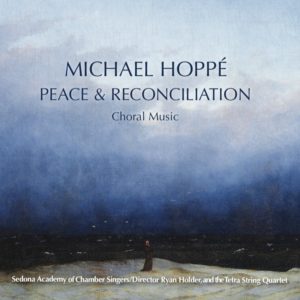 For me, there is something innately comforting about choral music. When performed with reverence, compassion, and respect it is akin to a small rapture for the soul. It consoles the spirit and frees the mind to meditate and reflect, and, to remember. Such is the music found on the album Peace & Reconciliation Choral Music by Michael Hoppé. This is a requiem, a collection of prayers sung for the souls of the dead, and it is a difficult work to create and perform. There is a marked difference between a dirge and a lament and this ten track album of sacred music is that difference. The voices belong to the Sedona Academy of Chamber Singers along with the Tetra Quartet under the direction of Ryan Holder. Michael Hoppé is a Grammy nominated and multi-award winning composer who wrote this dramatic work in memory of his parents, Susannah and Frank Hoppé.

The opening song Introit, begins with a sorrowful violin and is joined by angelic chorus. The prayer ask the Lord to accept these souls into his keeping of light and love. The passionate music cascades like water into a sacred pool, each ripple a new prayer as it mixes with fervent hope for eternal peace.

The next cut commences with the worshipful strains of the Tetra String Quartet who gently light the path for the Kyrie. The Kyrie is a prayer, a plea for mercy, dating back to the 4th century. It gained usage in the 5th century on. It is found in many modern classical works such as Bach’s Mass in B Minor.

The intent is a universal one, asking for the Mercy of the Divine and needs very little interpretation. There is sweet purity to the refrain, just three simple lines, but when sung by the heart that is honest, it is prayer that surely catches the ear of God. This is such a touching, uplifting composition and I admit that I replayed this more than any other.

It is very appropriate that the cello and violin weep on the tune Lacrimosa, which means Tears or Weeping. It proclaims a “day of weeping” for the departed and asks for compassion in dealing with their souls. The song is beautifully sung, the voices dulcet and clear. The music on this track is unobtrusive as the chorus assumes the lead with a dignified clarity.

Lux Aeterna or Eternal Light is sung with a definitive aire of sadness. It is an antiphonal lament that begs the Lord to shine His radiance upon the spirit for He is the Light that shines in the darkness. Once again, an exquisite introduction by the string quartet.

The final song in Hoppé’s Requiem is In Paradisum. Usually, it is sung as the mourners leave the church and proceed to the grave. I listen to this in a quiet, softly lit place, as is its due and reflect on the passing of my own mother so many years ago. As the message suggests, I hope that her soul was received in paradise, but some things in life and beyond leave little doubt. Hoppé’s denouement is swathed in peace as the chorus exudes glory to the God on Highest. There are three additional tracks, Sanctus, Pie Jesus, and Agnus Dei.

There are two bonus choral works on the album, Safe to Port (Grace) and I Am the Moon((Nightingale) that are from other Hoppé works. Both songs are soft melodies featuring reverential themes. Safe to Port is a prayer of thanks for a guiding light and I Am the Moon, which of course is about another kind of light.

The Requiem, the Mass for the Dead, is a unique part of Christian religion. Simply put, it is a hopeful, yet respectful farewell to the lost souls in our lives. It is sung in prayers and hymns that entreats God to grant them peace. Michael Hoppé’s Peace & Reconciliation is a quintessential example of such a work. In beauty and scope, the sounds and singing this choral music is such that it will ignore the brand of your beliefs and console you like no other elegy, written or sung.