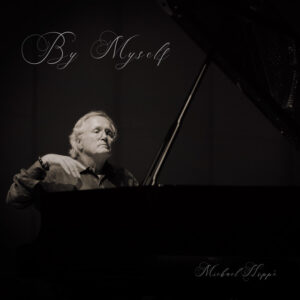 Michael Hoppé’s By Myself is the twentieth album of his that I’ve reviewed, starting with his 1996 release, The Yearning. One of my all-time favorite artists, Michael has created an extraordinary body of work in his long and colorful career. Melodic and often tinged with melancholy, Michael’s music is rarely composed for solo piano, making this a very special treat. Although the piano is a big part of most of his recordings, I think Hoppé’s only other solo piano album is Romances For Solo Piano (2007). Most of the fifteen tracks on By Myself have synth string washes added, but since Michael added them himself, this still counts as a solo album. Quoting the liner notes of the CD (available in Korea), Michael explains:

“When the pandemic arrived in 2020 it prevented many forms of social gathering including playing with other musicians. In more than 30 albums I have made, almost all of them have been recorded with other performers, so this digital album titled ‘By Myself‘ is just that, no fellow musicians, just me and the piano…. a solo piano album recorded at home, and resulting directly from the pandemic isolation.”

By Myself begins with “Beneath the Mexican Stars,” a piece created to celebrate the spirit and style of Mexican music. As he worked on this concept, Michael visualized a trio of Mexican guitarists playing “Beneath the Mexican Stars.” Graceful and lyrical, a shorter version of the piece also closes the album. “Lullaby For the Moon” is composed with Hoppé’s distinctive and heartfelt simplicity. You don’t need a fistful of piano keys to get the point across when it’s done as beautifully and honestly as this one is. “For What Its Worth” overflows with longing – deeply romantic and poignant, simple yet profound. “Why” is fascinating. In its brief two-minute span, it is constantly changing yet manages to maintain an emotional depth and richness. The mournful “Tears and Roses” goes right to the heart, expressing what so many people around the world have experienced in the past year and a half of the pandemic. “Across the Years” expresses nostalgia and loving memories of time gone by. “Heartstrings” is the perfect title for the piece composed and played in the deeply reflective and emotional style Michael is known for – and is so good at. I can’t imagine anyone not being moved by this gorgeous piece. “Song For Neko” is a graceful, romantic waltz and the perfect soundtrack to a sweet daydream. “Quietly Comes the Night” is peaceful and dreamy – a lullaby for the end of a very good day. “Sunset Waltz” brings images of star-crossed lovers dancing on a beach as the sky becomes alive with colors and then fades to soft grays. “Safe To Port” isn’t a new piece, but it’s the first time I’m aware of that it’s been a piano solo. Slow, peaceful and very melodic, I like this version best (although they are all beautiful!).

So, if you’ve been hoping for a solo piano album from Michael Hoppé like I was, here’s your chance! By Myself is available to download or stream on Amazon, Apple Music/iTunes, Spotify and other sites. A very enthusiastic double thumbs-up!